"The Tourists"...
...shouting out to to the one person brave enough to take on the Eastside trail in 30 deg with snow flurries! Dan The Man! (and soon to be Trees Atlanta Docent...possibly joining me in giving Eastside Arboretum Tours!) 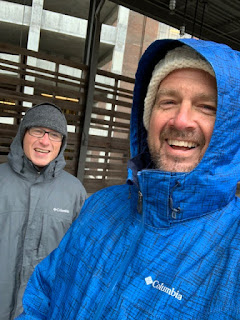 Map of the week...
...of the Beltline Eastside Trail's first railroad! From ATL RAIL:

"The first segment of Atlanta’s belt line system was completed in 1873 by the Atlanta & Richmond Air-Line Railway as part of a main line from Charlotte to Atlanta. By 1877, the company was in receivership, but was purchased and its name changed to the Atlanta & Charlotte Air-Line. In 1881, the line was permanently leased to the Richmond & Danville Railroad. In 1894, both the Richmond & Danville and the Atlanta & Charlotte, were reorganized out of receivership into a new company: the Southern Railway. This rail line subsequently became known as the Southern Railway Belt." 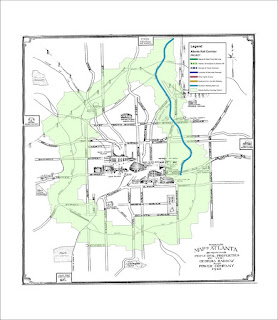 In honor of their beautiful display of early spring flowers, this month's "tree" is actually part of the genus Rhododendron; our beautiful native azalea collection on the "Freedom Parkway" spur. Definitely check them out ASAP. Here's one example of over 14 varieties of native azaleas that are native to Georgia; the piedmont azalea. 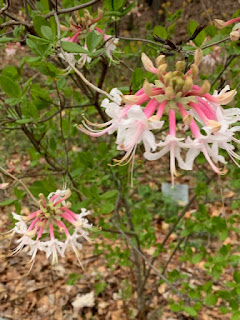 Q: What do Trees Atlanta docents do?
A: From the Trees Atlanta website, the docent "program trains volunteers to become a volunteer docent for Trees Atlanta’s walking tours of trees or prepare to speak to groups about Trees Atlanta’s mission and projects." But it's even more than that; simply put, docents help connect Trees Atlanta's mission with the larger Atlanta community. Enthusiasm! Education! Involvement!

Who dat docent?
Thanks, Trees Atlanta