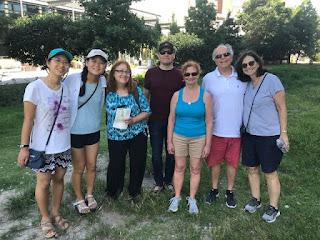 Map of the week...
Bird's eye view of Atlanta, 1892. Notice the railroad tracks weaving in and out of the right margin, leading north to Ponce de Leon Avenue. There, you can see the old pre-baseball-stadium lake on the north side and the pre-Sear/Ponce-City-Market amusement park on the south. Also, notice the old (now gone) railroad spur further to the north leading into Piedmont Park, possibly left over from the Piedmont Exposition of 1887 or to support the upcoming Cotton States and International Exposition of 1895.


Tree of the week...
...singling out one of the hundreds of specimens from the dozens of collections along the arboretum.

Swamp White Oak survives in watery, low oxygen soil, conditions not unlike the poor, post-industrial, recovering soils along the Beltline!


"Stump" of the week...
...featuring 2 questions raised during the tour that Jeff couldn't answer!


Q1: Upon hearing about the "3 Tree Hill" champion Scarlet Oak: "Was the tree famously lost a few years back in Decatur a champion as well?"
A1: Neighbor Jeff found out, "It sure was! At 150 years old, it was reaching the end of its lifespan and was taken down in 2012." <link>

Q2: Upon seeing the art installation at the Angiers Springs Beltline access point: "Does that represent rails?"
A2: Neighbor Jeff found out, "Based on what I read, the artist's original design did not specifically reference railroads, but he *did* say "the space constantly reinvents itself." And isn't that what great art does? In the context of time, our tour, the art we had just seen, and our newly acute awareness of the history of the Beltline, associating the tall, rusty iron forest with rail lines seem like a natural evolution of interpretation."