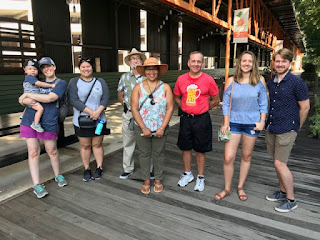 Map of the week...
Atlanta Wards, 1854. During the tour, we stopped where the Beltline intersects North Avenue to talk about Atlanta city limits. North Avenue was not a northern boundary of the city limits; it was "north" of the city until expansion in 1874. 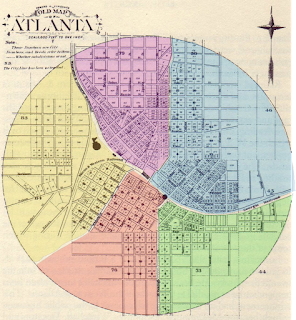 Box Elder is a fast-growing, short-lived native North American maple species with opposite, compound leaves. When a sapling, the box elder can display 3 leaves in its compound arrangement, causing some to mistake it for poison ivy. Soon enough, though, it will display its mature compound configuration of 5 leaves. The shape of individual leaves may not immediate bring "maple" to mind, but the end of summer showing of seeds will certainly be familiar to many! 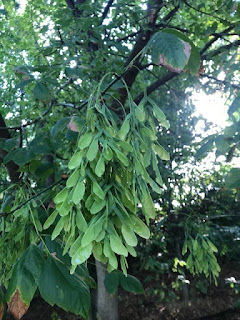 "Stump" of the week...
...featuring 2 questions raised during the tour that Jeff couldn't answer.


Q1: How does the Beltline determine/count usage?
A1: I'm still looking into the "how" Beltline users are counted, but here are some interesting stats from 2016:  "...1.7 million users of the Eastside Trail engaged in regular physical activity – walking to the store, biking to work, jogging, skating, and more – which reduces the risk of heart disease, stroke and diabetes and improves mental health and weight control, among other benefits.  Meanwhile, $3.7 billion of new development within the Atlanta BeltLine planning area (roughly ½ mile on either side of the corridor) proves the Atlanta BeltLine’s value as an economic catalyst." <link>

Q2: Upon seeing dead limbs on a Beltline adjacent tree, "why hasn't that been pruned?"
A2: Some details on the "how" and "if" of Trees Atlanta maintenance (including the Beltline Arboretum): "Trees Atlanta's planting season is October-April, when newly transplanted saplings haven't yet leafed out and can put energy into re-establishing their roots. When not planting, Trees Atlanta leads regular volunteer work parties to improve both Atlanta's planted and forested areas by pruning trees along streets and removing invasive plants from parks and forests." <learn more>