This Week's Tour...
...met at new, winter months' time 10:00AM Saturday on the Beltline Eastside Trail near Parish. We walked for 1 1/2 hours, covering 1 mile of the Beltline, ending at Ponce City Market.

"The Tourists"...
...shouting out to this week's tour group, the 9 enthusiastic souls (out of 30 sign-ups!) that braved the occasional sprinkle to help make this tour super fun! 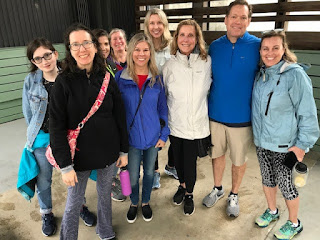 Map of the week...
At the intersection of the Beltline Eastside Trail and Freedom Parkway, we talked about I-485, with tour members correctly calling out that its proposed development help spur the creation of many neighborhood groups to fight against it (most of which still exist today as part of the NPU process to deliver citizen opinion to city council proposals). While many homes were acquired by the GDOT and razed (500+ by some accounts), a successful citizen campaign helped negotiate new endpoints for the proposed roadways at Ponce and North Avenue, keeping the majority of Candler Park, Virginia Highland, Morningside, and Decatur neighborhoods intact. 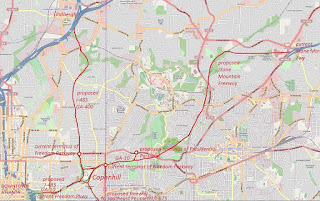 On this month's tour, because there are so few deciduous trees that retain their leaves throughout winter, we talked about those do, a characteristic known as "marcescence". Many species of oaks retain their leaves, but my personal favorite is the beech, whose beautiful coppery leaves can be seen throughout the forest understory, fluttering in the winter wind until abscission causes them to drop the dead leaves in the spring. 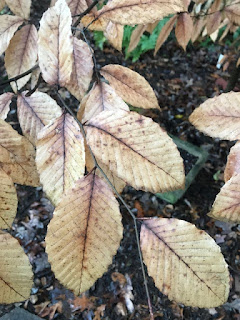 
Q: What do you know about that park on the westside that will be bigger than Piedmont?

A: That would be the new Westside Park at Bellwood Quarry! It's not yet open to the public, but a great way to see it (from outside the construction fence) is by walking the Proctor Creek Greenway. 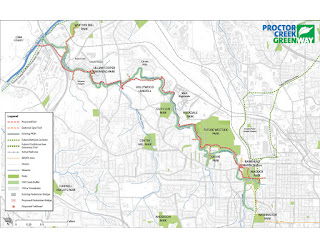